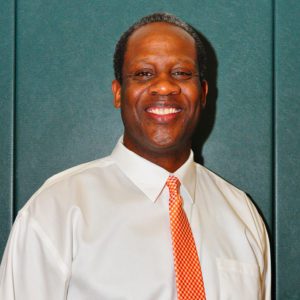 George McCleod was born in South Florida and raised at the Northern tip of Broward County in Deerfield Beach. He graduated from Deerfield Beach High School in 1995 where he was a member of the boys’ basketball team, the orchestra, and the jazz band. In the fall of 1995, he was awarded a scholarship to play basketball at the University of North Florida (UNF) under the direction of Coaches Rich Zvosec and Sidney Green. In 1999 George McCleod received his Bachelors of Arts and Science majoring in Criminology with a minor in Sociology. After graduating from U.N.F., Coach McCleod began his coaching career as a men’s assistant basketball coach at Florida Atlantic University in Boca Raton, Florida. Following his collegiate coaching career, he served as an assistant girls’ basketball coach at The Bolles School and Paxon School for Advanced Studies in Jacksonville, Florida for a total of five years. In the 2006-2007 school year he accepted his first head coaching position at Englewood High School in Jacksonville, Florida, where he also was a teacher of students with disabilities. In 2012 he led the team to its first regional playoff game in nearly 10 years. After 6 wonderful years at Englewood, Coach McCleod accepted the girls’ basketball head coaching position at Mandarin High School where he led the team to a second straight district championship and regional playoff appearance.

Coach McCleod is in his eighth year as Mandarin’s head boys’ basketball coach and is excited about the overall direction of the team, athletic department, and school. He led the Mustangs to its first back-to-back District Championships and two consecutive playoff appearance (2019 & 2020) since 2007. He is currently in his 21st year as a Duval County School Board employee. He earned his Masters degree in Coaching and Athletic Administration at Concordia University at Irvine in August of 2016. He is supported in all of his endeavors by his lovely wife Shante' McCleod and two beautiful children, Myiah and Dylan. Coach McCleod’s philosophy is simple. We must strive to be our B.E.S.T (Being Exceptionally Special Today) in all that we do so that we may positively influence others to do the same.